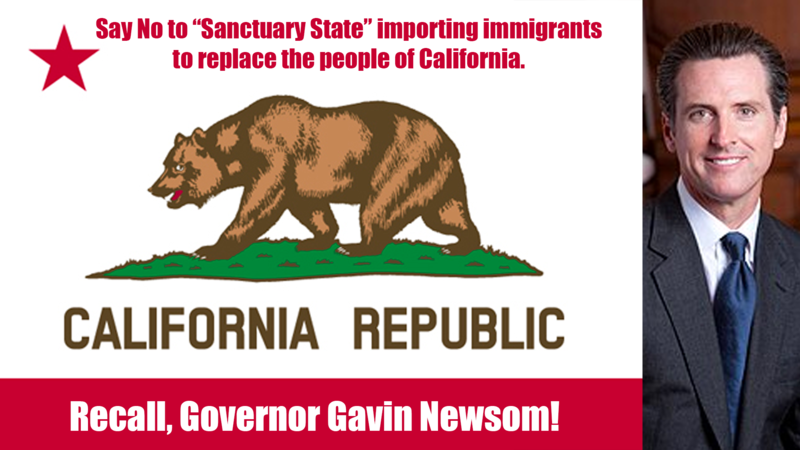 Governor Gavin Newsom in addition to Governor Jerry Brown have declared California a Sanctuary State, importing illegal immigrants to replace the people of California, and give them California’s tax payer funded goods and services in order to alter the voting demographics against Americans, and in favor of Democrats.

Californians did not vote for Sanctuary Cities, or for California to feud with President Trump to bring in illegal immigrants to replace Californian citizens.

Therefore, here is a petition to Recall Governor Gavin Newsom.  If you agree please sign the Petition.

Thank you for your time.  Make California Great Again!

For more information on the process to recall a California Governor, goto: https://www.sos.ca.gov/elections/recalls/procedure-recalling-state-and-local-officials/

The Last Californian Governor to be recalled was Governor Gray Davis, who was replaced by Governor Arnold Schwarzenegger.

How about our vets? I wonder if Newsom is as concerned about our vets as he for allowing as many immigrants into our country and giving them “free stuff”? How many VETS commit suicide every day? How many VETS are homeless, addicted to drugs, and are essentially without hope? Newsom offers the people of California, higher taxes, more government restrictions, and open borders. RECALL NEWSOM NOW! MAKE CALIFORNIA GREAT AGAIN!!!