Menu
View cart “On the Trail of the Nephilim: Definitive Proof of the Biblical Giants” has been added to your cart. 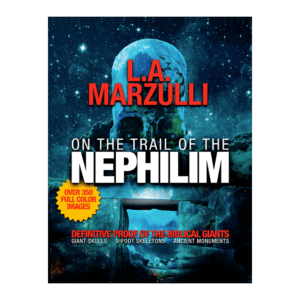 Why are our children listening to music that calls for aliens to have sex with them? Why are bands naming themselves after the fallen ones? Why are riots breaking out in Britain and the Middle East? What will really happen in 2012? Does all this tie in somehow with the dreadful economic conditions in which we find ourselves? Why is Lady Gaga dancing with the dead?

Was all this predicted long ago?

Who is right: the Bible, the Maya, the Hopi, or Edgar Cayce? Do they all say the same thing? Do all roads lead to the same destination?

L.A. Marzulli argues in The Cosmic Chess Match that we are in a cosmic war that has been raging in an unseen dimension for millennia. The seeds of the present global chaos were the result of one of the earliest moves in this match. However the end is also predicted and the Rider on the White Horse will triumph.

What does it mean that the sons of God had offspring by human women? That those offspring were on the earth during the days of Noah, and “also after that?”

Could the answer to this question provide additional answers to not only many ancient mysteries, but to difficult questions found throughout the Old Testament.

It is upon this very question that COUNTERMOVE is predicated. L.A. Marzulli once again pulled back the covers of the darkness to reveal the answers to this enigmatic matter, and shows with careful analysis that this answer isn’t something that is relegated to our distant past, but is in fact making itself known in our culture right now. L.A. takes the reader behind the hyper-dimensional curtain and unveils the interactions taking place within the angelic conflict. His relentless research has led him to discover and decipher the code that unlocks Satan’s playbook. With this knowledge, Marzulli skillfully escorts you from the Garden of Eden into the Days of Noah to equip you with a richer understanding of the prophecies in the book of Revelation – and the answer may shock you.

My introduction to L.A. Marzulli came through a trilogy of fictional books he started writing in the late 90s. At the time, I was moving from pastoral ministry in rural West Virginia to join the administration and faculty of a Bible college in southwest Missouri.

I remember as I read his books that I was amazed. Here was someone taking some of the most controversial – but foundational – revelations from Scripture and presenting it in an approachable way that not only made for a compelling story, but also provided an unflinching look into the contemporary possibilities and nefarious plans of the rebellious fallen supernatural world.

Today, I am privileged to call L.A. Marzulli “friend.” I’ve been working with L.A. on various projects for nearly a decade and, as I read some pre-release portions of this book, I believe this may be some of his most important work yet.

What does it mean when we read in Genesis 6 that the sons of God had offspring by human women, and that those offspring were on the earth during the days of Noah, and “also after that?” Some have surmised, among them the conservative commentators Keil and Delitzsch, that these Nephilim were some sort of human tyrants which “fell upon the people” in order to oppress them, and which existed contemporaneously with the sons of God incident as well as afterwards. This is an unfortunate misunderstanding of this passage, based I believe on a two-fold presupposition: 1. The mistranslation of the Hebrew term Nephilim and 2. The denial of the possibility of supernatural intervention into the genome of the human race. The consideration of either is beyond the scope of this foreword, other than to state such an understanding does not stand up to linguistic and objective scrutiny.

Others postulate that these Nephilim were simply regular, ordinary men born from a union between the unholy line of Cain and the godly line of Seth. This view gained wide acceptance during the Middle Ages but the idea didn’t even exist until the 3 rd century AD, and was most certainly not the view shared by both ancient Jews and early church fathers.

So, what then are we to make of the idea that these Nephilim – which appear in Genesis 6 and Numbers 13 – are found both prior to and after the flood of Noah? It is upon this very question that this book is predicated. It would be one thing if there was some sinister supernatural plot occurring prior to Noah’s flood but the flood waters ended the issue and literally washed all the problems away. That is, unfortunately, not what the Bible reveals. Instead, we find that after the flood waters recede and humanity repopulates the earth, the Nephilim are once again present.

But how? Did they survive the flood of Noah? Or could the answer to this question provide additional answers to not only many ancient mysteries, but to difficult questions found throughout the Old Testament?

L.A. has once again pulled back the covers of darkness to reveal the answer to this enigmatic matter, and shows with careful analysis that this answer isn’t something that is relegated to our distant past, but is in fact making itself known in our culture right now. This book should be required reading for every serious student of God’s Word, but I need to advise some caution before proceeding – be prepared to reexamine some of the most challenging passages in the Old Testament as you consider the truth found throughout the pages of this book as it reveals a disturbing plot against humanity. So be forewarned.

The contents of the following pages are not for the faint of heart. This isn’t taught in seminary, it’s not taught in church, and many pastors are completely unaware of what you are getting ready to read. Why do you suppose that is? The answer might disturb you.