Menu
View cart “On The Trail of the Nephilim Ep 2: Mathematical Mysteries of the Moundbuilders” has been added to your cart. 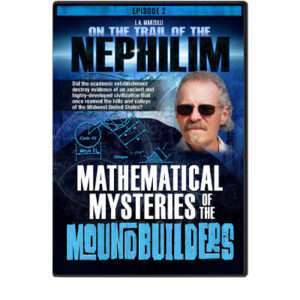 Two Millennia ago a culture that is still unknown to us today erected thousands of mounds throughout the Midwestern United States to the Gulf of Mexico.

They are called the Hopewell, the Adena or the Mississippian… However, no one knows what these people actually called themselves. In other words, they remain mysterious and unknown to us today.

When the first white settlers came into The Great Circle Mound in Ohio, they asked the Native Americans living there… Who built this? The natives replied that they didn’t know who built them, as these large mounds were there and abandoned when they arrived.

They discovery both these mounds created a controversy as some posited the mounds were build by an unknown lost tribe of people, who migrates, perhaps, from the old world.

Others thought they could be one of the lost tribes of Israel.

The debate continued until the late part of the 19th century when the conclusion was made that he Native Americans had built the mounts, but they had simply forgotten they had done so.

This is now the accepted paradigm. However, is it the truth of what occurred in the ancient past or has the information been managed to bolster a particular narrative.

Join us as we explore the Mysterious Mounbuilders.

After almost a month of being permanently displaced by the Woolsey fire, our online store is up and running again—at least some parts of it are. The new film Mysterious Moundbuilders, which is the first in the On the Trail of the Nephilim series, was delivered to our “rented home” the day before Thanksgiving. We now have a garage full of DVDs and we’re shipping today! Here’s what some people who have seen the film say about it!

Awesome! Simply awesome! This was handled perfectly and your experts and consultants were on target!! Great job!

Moundbuilders is one of LA’s best work yet!! From beginning to end this documentary will have you on the edge of your seat. If you at all wondered how the mounds found all over the world could have actually been built, who built them and even why this is the documentary to watch. Could our history be wrong? Why does there seem to be a managed narrative and bias by secular academia? (Why, when following the evidence, does it end up taking us back to the bible?) Watch as (our friend) L. A. and his team goes on the trail to tackle these questions and more. Listen to Native American accounts and what Archaeologists and Anthropologists have to say when looking at evidence that doesn’t line up with official narratives. Is there a coverup? I can’t wait for the next installment in this gripping new series, On The Trail of the Nephilim.

Chuck thought the film was excellent and said thanks for giving his experiences a voice.

Awesome! There is no way someone can watch that production and not realize secular history is fabricated.

Hi L. A.
My daughter in law and I just watched your new video and loved it! Best pictures of mounds I have seen. Most photos of the mounds don’t do justice, but yours are great. Thank you for using pictures of our site too. Nicely done documentary! Looking forward to part 2 next year!

L. A. Marzulli and his associates dare to look beyond, or rather underneath, the inadequate yet commonly accepted, explanations given for the presence of these mysterious structures found throughout our country. By combining skilled film making, experienced Archaeologists, competent research, practical hands-on experimentation, sound reasoning, and dedication to the most ultimate of standards – the Bible, this film series promises to be mound-breaking in it’s search for the truth concerning Prehistory in North America and the world at large.